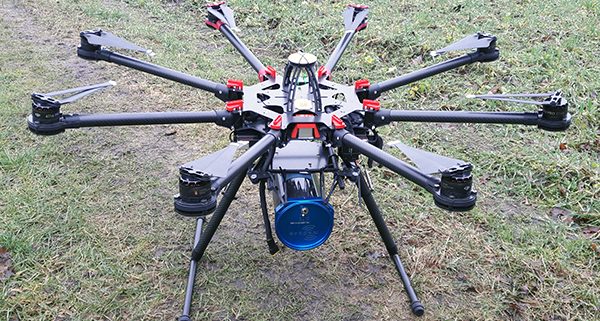 Recently we finished a first series of flight tests of our “drone-borne” gamma-ray sensor. To answer to the increasing demand for drone-borne sensing systems, we decided almost a year ago, to start the development of a lightweight and rugged version of our gamma-ray detection systems; the “drone detector”. The aim of the project is to create a low-weight, low power and fully self-contained sensor system fit to be used underneath a “standard” unmanned areal vehicle (UAV). A challenge that – as we found – not only involves a fully new detector design, both in hardware as in software, but also a careful look at the drone specifics as we found out the hard way when our first prototype crashed while flying…

The project aimed  at solving a number of issues that prohibit the use of “standard” gamma-ray detector systems on drones. We had to figure out a new shape and size of the sensitive part of the detector. Next to that, the type of material used for the radiation detecting part had to be revised, and a new type of optimized housing had to be developed for the sensor. In a second phase we worked on the miniaturization of the  sensor electronics. Small footprint and low-power electronics are key for a drone system. A 3rd step in the project was to create embedded software for the system to become fully self-contained. Traditional radiation sensing systems require some kind of operator interference. This of course cannot be done on a drone so we had to find ways to have the system control itself.

All of this has evolved in a prototype sensor system. In a collaboration with drone specialists from the University of Wageningen and from the company Vliegend.nl we have done tests of the system underneath a drone and on a crane for testing elevation effects.

Want to join the discussion?
Feel free to contribute!

The Medusa Institute is here!
Scroll to top